What is AFCAT? – AFCAT stands for Air Force Common Admission Test. It is popularly referred to as the Indian Air Force Exam. AFCAT is a national level competitive exam conducted by the Indian Air Force (IAF) to select officers for all its branches, except for the medical and dental branches.

The AFCAT is conducted twice every year, once in February, and the other time in August/September. The IAF recruits its officers broadly under three branches, they are the Flying Branch, the Technical Branch, and the Ground Duty Branch. 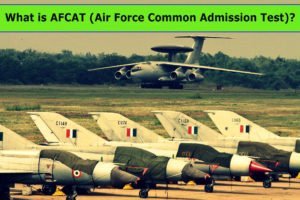 The Flying Branch consists of Fighters, Transports, and Helicopters. The Technical Branch deals with the Mechanical and Electronic aspects, while the Ground Duty Branch comprises Administration, Accounts, Logistics, Education, and Meteorology.

If this information on the AFCAT has caught your attention, and you want to know more about AFCAT, which institutes provides the best AFCAT Coaching in Chandigarh.

Here are the links below for Top AFCAT Coaching Institutes in Chandigarh:

Get in touch with us