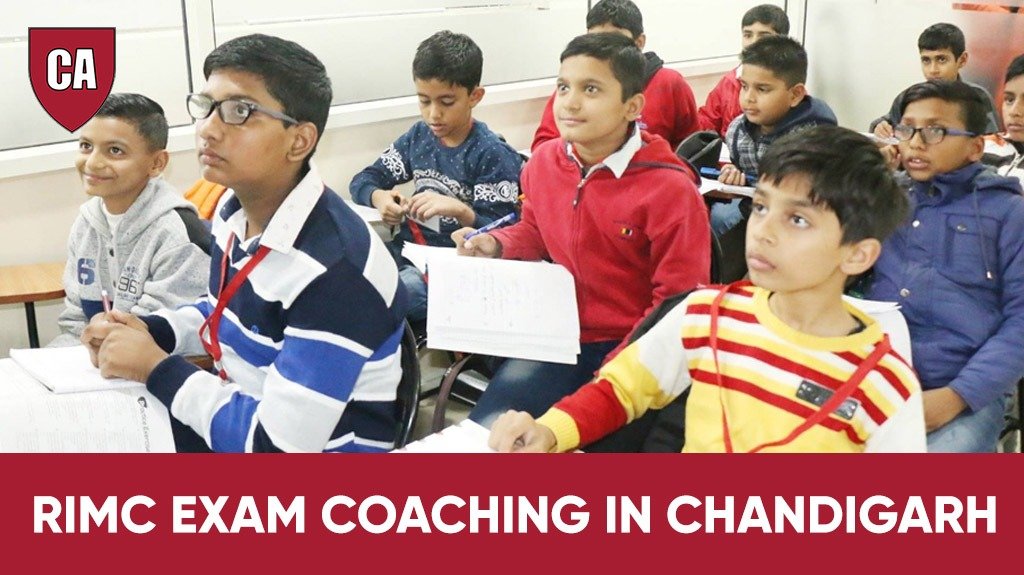 It was then located on the premises of the erstwhile Imperial Cadet Corps ( also called Rajwada Camp), set amidst 138 acres of lush green countryside adjacent to Garhi Village in Dehradun Cantonment. During his address to the first thirty-seven cadets, he said, “It is the first few blows on the anvil of the life that gives the human weapon the set and temper that carry him through life’s battles”. The Prince also made reference to the old Indian tradition of “Guru and Chela”. This relationship of mutual love and reverence has formed the basis of RIMC ethos.

As on 1st January/1st July of the term, they join should not be more than 13 years not less than 11 and a half years.
The last date of submission of application is 31-March/30-September.

The entrance examination will be conducted during the first week of June and December.

Why Chandigarh Academy for RIMC Exam Coaching in Chandigarh?

The Rashtriya Indian Military College is an Inter-Services Institute and a Category A establishment of the Ministry of Defense alongside institutions like National Defence Academy, Khadakvasla, Officers’ Training Academy, Chennai, and Indian Military Academy, Dehradun.

ADMISSION PROCEDURE
Approx 25 Cadets are admitted every six-month. Candidates should not be less than 111/2 years of age or must not have attained the age of 13 years on 01 (Jan) and 01 (July) of the term they join. Admissions are made to Class VIII only. The Candidate must be studying in Class VII or passed class VIII from a recognized school at the time of joining. Application forms are to be submitted to respective State governments. Candidates are selected on the basis of their performance in an All India Entrance Examination held twice a year comprising a written examination consisting of test papers in English (125 marks), Mathematics (200 marks) and General Knowledge (75 marks), successful candidates are called for Viva-Voce test (50 marks). A merit list is prepared and those who qualify are sent for medical examinations. Those finally cleared are invited to join up.

DESTINATION
The College provides education on the lines of residential public schools principally for boys who desire to join the Defence forces of India. Those who do not succeed in this aim or decide against it are well qualified to join a college or professional institution on graduation from the RIMC. However, the College advises only those to apply who are interested in taking up the challenge of serving in the Defence forces of India.

PROSPECTUS
The prospectus for the RIMC entrance examination with sample question papers is available at a payment of Rs. 550/- (by Demand Draft) to be sent in the favor of The Commandant, RIMC Dehradun

AGE
The admission to the College is bi-annual i.e., in January and July each year. Candidates (boys only) should not be less than 111/2 years of age but must not have attained the age of 13 years on 01 January and 01 July of the term they join.

Note:- The actual dates notified, from time to time, by the Government of India, in all the national/leading newspapers will be adhered to.

EDUCATION
Admissions are made to class I (equivalent to class VIII) only. The candidates should be studying minimum in class VII in a recognized school at the time of admission to the RIMC. They should also be medically fit for entry to the College, in accordance with the MEDICAL STANDARDS PRESCRIBED.

VACANCIES
Generally, one vacancy per state is reserved for candidates. However, States like UP, Tamil Nadu, West Bengal, and Maharashtra which have a large population, have up to 2 vacancies. If the selected student does not join a  candidate in reserve from the same state joins. If there are no reserve candidates from respective states then reserve from all India merit joins.

ENTRANCE EXAMINATION
For admission into the College, candidates are selected on the basis of their performance in an All-India Examination held twice a year. The general standard of questions in the entrance examination is of class VII.
There are two sections for the entrance exam:-