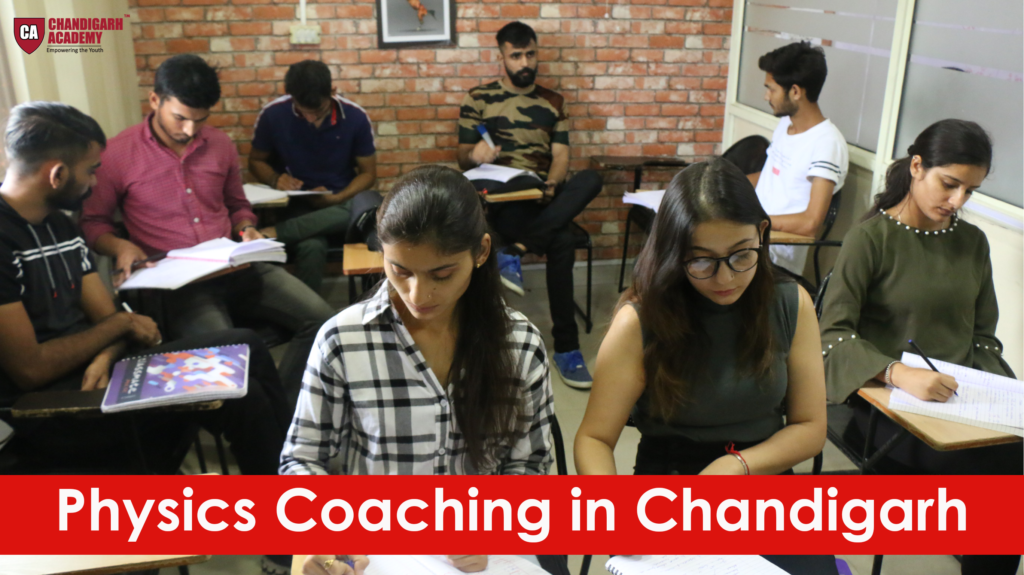 At Chandigarh Academy, the student learn to practice and to be subject experts. They learn to master and to take a broad perspective; to solve problems and to seize tomorrow’s opportunities. Chandigarh Academy, where teaching and learning converge to drive innovation, we understand that the future belongs to those who can recognize potential. We select the students from around the country and provide them with the skill and concepts necessary to succeed in Engineering & Medical Exams.

The Physics syllabus includes laws, formulas, equations, theories and series of experiments which a student must grab. The subject leads you to the real world of imagination, the planetary motions and the universe which sounds an interesting one, isn’t it?

All the matter and the elements of the universe are bounded with various principles of physics and also obey the laws right from the beginning of the life on the planet. The advancement in the field of science and technology is one of the results of works of physics.

Classification of elementary particles and their interactions ; Conservation laws ; Quark structure of hadrons; Field quanta of electroweak and strong interactions; Elementary ideas about unification of forces; Physics of neutrinos.

Electric flux, statement of Gauss’s theorem and its applications to find field due to infinitely long straight wire, uniformly charged infinite plane sheet and uniformly charged thin spherical shell (field inside and outside).

Conductors and insulators, free charges and bound charges inside a conductor. Dielectrics and electric polarisation, capacitors and capacitance, combination of capacitors in series and in parallel, capacitance of a parallel plate capacitor with and without dielectric medium between the plates, energy stored in a capacitor.

Internal resistance of a cell, potential difference and emf of a cell,combination of cells in series and in parallel. Kirchhoff’s laws and simple applications. Wheatstone bridge, metre bridge.

Potentiometer – principle and its applications to measure potential difference and for comparing emf of two cells; measurement of internal resistance of a cell.

Ampere’s law and its applications to infinitely long straight wire. Straight and toroidal solenoids, Force on a moving charge in uniform magnetic and electric fields. Cyclotron.

Self and mutual induction.

Scattering of light – blue colour of sky and reddish apprearance of the sun at sunrise and sunset.

Optical instruments: Microscopes and astronomical telescopes (reflecting and refracting) and their magnifying powers.

Matter waves-wave nature of particles, de Broglie relation. Davisson-Germer experiment (experimental details should be omitted; only conclusion should be explained).

Energy bands in conductors, semiconductors and insulators (qualitative ideas only)

Semiconductor diode – I-V characteristics in forward and reverse bias, diode as a rectifier;

Junction transistor, transistor action, characteristics of a transistor and transistor as an amplifier (common emitter configuration), basic idea of analog and digital signals, Logic gates (OR, AND, NOT, NAND and NOR).

Why Chandigarh Academy for Physics Coaching in Chandigarh?

Every student is important to us at Chandigarh Academy, and we see the part we play in their education as a true privilege.

Our proven methodologies and teaching techniques at Chandigarh Academy are guaranteed to boost test scores and build confidence in all students, no matter their starting point. There are no tricks or shortcuts – just tried and true strategies for success.

At Chandigarh Academy, we teach students to work smarter, not harder. With innovative teaching techniques, qualified instructors, and quality learning materials, we help students strengthen their foundations and improve their skills, with guaranteed results.